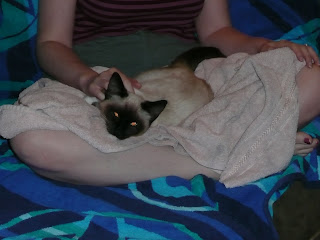 We've spent a lot of energy this week worrying about and praying for our practice kid, Dante (our cat). After keeping him in the garage for a week we finally let him outside on Thursday night. He was as happy as a clam--chowder eater on a cold day with a little french bread on the side. He just had to smell everything and climb the trees and test out every hidey-hole. We followed him around for 30 mins but he eventually he gave us the slip. We meant him to be an outside kitty (Jonathan is allergic to animals) so we knew we had to let him go. At first we were happy for him but then we started to worry. Would he come back to us? Would he get lost? What if he comes back while we are at work and thinks we aren't coming back? What if he is hungry or scared?

We didn't see him for more than 24 hrs. We took turns calling and walking around shaking his toys. We had prayed and I had cried (Suck it up woman!). I'm pleased to report than Jonathan found Dante. Jonathan sat on our porch and called for him. Dante had been hanging out on our neighbors porch and came over. There was much rejoicing at the Clare's. We showered Dante with affection and he ate and ate and ate. I had him sitting on the couch eating out of a Nine Lives can. Jonathan kept walking by saying "Don't get used to this cat! This is a one time thing!"

PS. My last 3 picture posts were posts that I meant to write and never got around to. Alas--no words for you but peace of mind for me. I can now move forward in the blogosphere without lingering guilt. Thanks.
Posted by BanAnna at 7:48 PM

so so relieved at the happy ending. maybe it's his name. he can't help but try and escape, but in the end he'll always come back to the ones he loves..

btw, i don't want to give away the fact that i've been on pins and needles since july, but, what about the couch...green or no?:)

I hate it when your cat doesn't come home as scheduled. Very nerve-racking stuff.

may I suggest not putting your "real kid" in the garage.

The couch was decided to be olive... whatever that means. There is a picture of it in one of the pictures of the house that Anna posted. You be the judge. Mister Dante has been doing well, he now has to defend his new territory from an outside cat. I think this has in some weird way been good for him, him feel like he has a home to protect. I have come to the conclusion he loves the garage, and that is where he will stay. :-) I wonder if Anna will go For Beth's comment. :-)

i think olive was a great compromise. thank you, i can check that off my list of needed to know items:)