Forgive me friends for I have sinned. It has been 4 months since my last confession (I mean blog).

Well much has happened at the Clare house but this post is devoted to our furry, four-legged, kibble-crunching children. First and foremost let me introduce Otis. 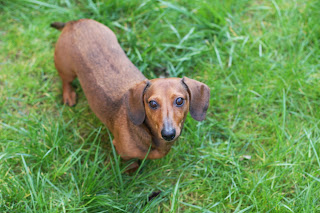 We got Otis from a shelter in December. He 's a red smooth hair dachshund just like Jonas but he's a miniature and weights about 12 lbs. As you can clearly see he is ADORABLE. He is also willful, high-energy and obsessive (doggy OCD for sure). He loves toys. If he glimpses something that might be a toy on a desk or a counter he will sit in front of it and whine until you pick him up and let him inspect. He'll pick a favorite toy and carry it around for days. He'll take it on walks. He won't eat unless that toy is next to his bowl or in his bowl. If you put it away he will look for it . . . for hours. He always remembers where he left it the day before. And his greatest joy--and surely his purpose for existence--is to play fetch. 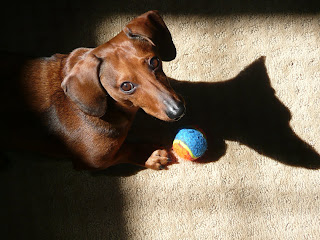 If you get tired of throwing the ball to him he will throw it for himself. His second favorite game is to "lose" the ball under a bed, couch or ottoman and make you fish it out for him. He'll even point his nose to show you right where it is. 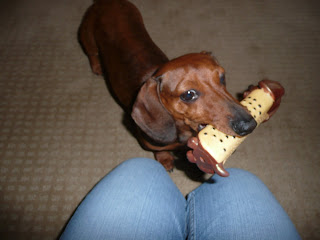 On New Year's day, after we had Otis for less than a month, he slipped a disk in his back. We took him to the vet and he gave him a shot and told us to keep him quiet for several days. Two days later his back legs were paralyzed. He didn't seem to be in pain but his eyes had that pleading "help me" look. We took him to our regular vet and then on to UC Davis Veterinary Hospital for emergency back surgery. They removed 4 discs in his back. 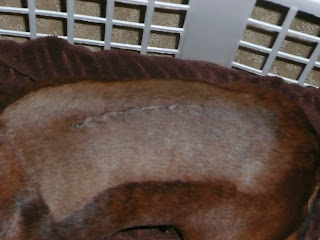 Here are some pictures of his staples and his shaved back. Poor little Odie! 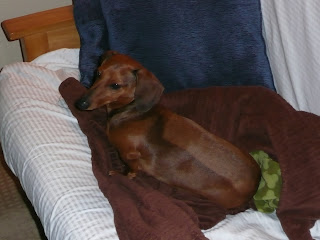 The Hospital kept him for several days and then we brought him home for 4 weeks of crate rest. At first we weren't sure if he'd be paralyzed forever but after a couple days he started wagging his tail. And then gradually his back legs could support his weight. We weren't supposed to let him walk around but sometimes we would open the crate and he would dart out and run around the room legs flailing. I guess it never occurred to him that his legs might not work right. He improved day by day. 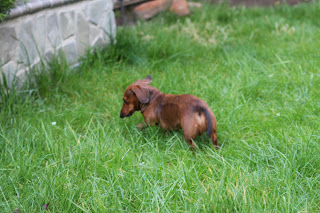 This is a picture of Otis last week. His legs are strong and he runs and moves just fine. He is back to playing fetch and whining for toys . . . just as he should. 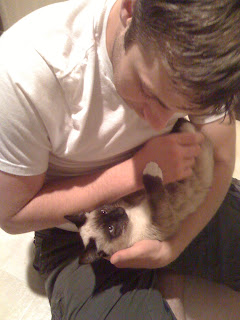 Here's a picture of Jonathan with Dante, our other fur kid. We got Dante in October of 2008. Unfortunately, Jonathan is allergic to cats and some dogs (although he hasn't had a problem with either of our dachshunds) so Dante was an outside kitty but he slept in the garage. Well after we got Jonas we started to feel a little guilty. Did Dante feel sad or unloved because the dog lived inside and he didn't? Surely he knew that the dog got lots more attention than he did. Did it hurt his feelings watching Jonas and then Otis coming in and out for walks, or taking rides in the car? 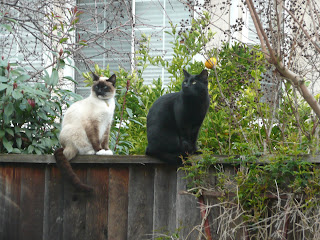 This is Dante with his BFF Smokey.
Well a about 2 weeks ago our next door neighbor came by to make a confession. He had been feeding Dante and having him in their house. He told us that he and his wife just loved Dante. They are an older couple and they live by themselves, their kids all grown up. Jonathan and I were so excited. We went back to the neighbors and offered them the cat. They were ecstatic! We gave them Dante's bed, food, kitty litter, toys, etc. So now he is a mostly inside kitty. He sleeps in a house and gets lots of loves. He comes to see us sometimes and he is all soft and well brushed. He was meant to be their kitty.
Posted by BanAnna at 7:15 PM 2 comments: