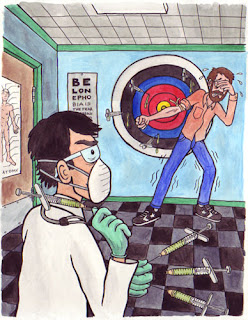 In the end I was given a clean bill of health. Nothing wrong with me except for a fear of needles. On the plus side I had a great story to tell at work the next day.
Posted by BanAnna at 7:59 PM

No. Way. That is intense! I'm glad you're ok! I don't even know what else to say. That's quite a story.

At least you have a GREAT story to tell!!

I wonder if you can request that they just put you under for the blood drawing.

The funny thing is that I was just telling Kristina the other day about your hard to find veins and how you had to suffer through multiple pokes.

What an ordeal! I was reading that on the edge of my seat like a thriller novel or something! So glad you are ok!!

I'd hate to know that my bum was out there for everyone to see... I'd take a needle poke over that any day!!!

I have three words for you before your next blood draw: Xanax

You poor thing! My heart was pounding; it made me think of how scared of spiders I am. What a story for sure!

Anna, that was the best post I have ever, ever read. I am intensely sorry that you experienced it, but man that punch line

"I got to enjoy being stuck by 4 more needles--the cause of my being there in the first place.

In the end I was given a clean bill of health. Nothing wrong with me except for a fear of needles."

Wow. Is "hyperbolic humor" a real term? Because I want to use it- what a great story.