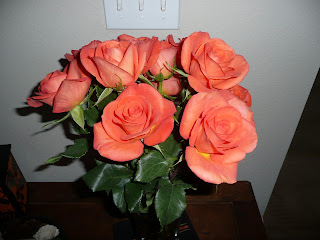 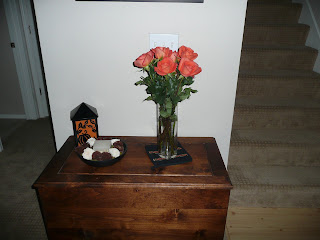 The Halloween roses were the best! Jonathan and I went to Safeway a couple weeks ago and he surprised me with flowers. He claimed he needed to use the facilities and left for 5 mins while I continued shopping. When we got out to the car and started putting away groceries Jonathan said he wasn't feeling well and asked me to drive home. I was feeling all concerned about him until I opened the driver's-side door and found a bouquet of orange roses. Don't I have a sweet hubby? 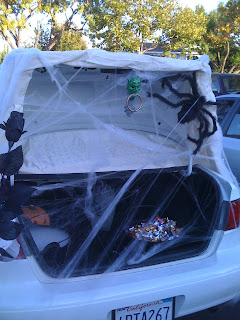 This is our trunk for the ward Trunk or Treat party. We had a lot of fun setting it up. We had dry ice in a cauldron creating a misting/foggy effect and creepy music playing in the car. 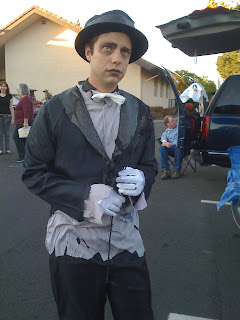 And this is Jonathan dressed as a dead groom. That is a black rose he is holding--nice touch huh?

I was dressed as Lucille Ball with a red wig and a polka dot dress. Our costumes were not related but all the ward members thought they were. They kept asking us why Ricky was dead. Hehehe . . .
Posted by BanAnna at 8:56 PM

Did you have to use a spider to decorate your trunk?

Can we see a picture of Lucille Ball?

so interesting, jonathan's costume resembles what rhett looks like when I ask for more money...flowers were a fun touch, keep doing stuff like that for each other! (i would also like to see lucille!)

Thanks for the interest in my costume but we don't have any pictures. I was going to have Jonathan take pictures on Halloween but the wig wasn't very comfortable and I changed out of my costume before he had the chance.

Dad,
Isn't the spider creepy. When Jonathan brought it home I was afraid to touch it and didn't want it in the house. I knew it was fake but somehow I still felt oookie holding it. But then we named it Frank. . . And I kind of got over it . . .

I think we should get Anna back into the costume and take a picture, she was so cute. As to the inspiration, I actually had been looking for Gandalf but they were out. Then I found this and thought it was spooky and appropriate :-) Doing things like Mel said is key to keeping a happy wife, and I find that is the best investment!

I love Lucy. I've watched the program every day for 2 1/2 years now. Did you know that eventhough Lucile Ball has passed away she is still the number one female commedian?

i love lucy as well, do you know what else i would love? updates on the clare family!:)