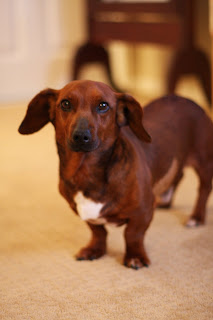 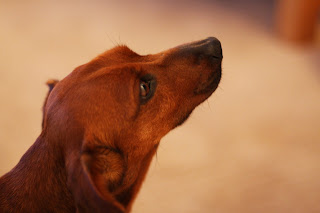 It's been a difficult couple of days at the Clare house. Yesterday morning when we woke up Jonathan noticed that our new dog Jonas was breathing funny. I wasn't too concerned until I tried to feed him breakfast. No interest at all--and Jonas LOVES food. A Lot! We knew something was very wrong.

I called the vet and took him straight over. Poor little guy. The initial assessment was that it was heart disease. We were devastated. We thought we were going to lose our sweet Jonas. However, after an ultrasound, multiple X-rays, and blood work they ruled out heart disease ($1000 later, grrrrrrhhh). They found a lot of fluid in his lungs but otherwise a clean bill of health. They said his heart has a small defect but it's strong and should not pose a problem for him. Unfortunately they don't know why his lungs are filled with fluid. When I came to pick him up at the end of the day everyone referred to him as the "mystery dog." In other words, there was no diagnosis. The vet's theory is that he probably ingested rat poison 2-3 weeks ago (before we got him). Apparently rat poison causes internal damage but isn't noticeable until roughly 2-3 weeks after it is eaten.

The vet sent us home with some medication to clear up the fluid and an antibiotic--"to cover the bases." Although we are so happy to know that Jonas will be alright it's breaking our hearts to have him home. When I picked him up his breathing was worse than it had been when I brought him in. All last night he was struggling. He refused to eat or drink and would barely move. We tried to make him comfortable. We got him to take his pills with peanut butter (clearly not sick enough to pass up peanut butter!) I got him to drink a little water by dipping my fingers in his water dish and having him lick them. He was clearly exhausted. All his energy was spent on breathing.

It was painful to watch. Both Jonathan and I ended up in tears at different points in the evening. Jonathan was able to give Jonas some relief by holding his head between his hands. Jonas seemed to relax and breathe a little easier. That was about 1:00 am. It was a long night.

Jonas is doing a lot better today. His breathing is still labored but he is eating small amounts, walking a little bit (very slowly), and drinking water. I'm feeling a lot more confident about his recovery. We definitely had our doubts yesterday.

We have only had Jonas for a week and a half but we are so happy to have him. His sweet personality has melted our hearts and we can't imagine life without him. We are so grateful for him and are pleased to know he'll be with us for a long time to come.
Posted by BanAnna at 4:40 PM

What a sweetie. Did the Dr. give you some Vit K?

I'm glad Jonas is doing better. It's very hard to see anything suffer.

Now take all those feelings you have for Jonas, multiply by about 100 times and you get an idea of what it's like to be a parent, and of how much we love you.

He didn't give us any Vitamin K. What does Vit K do?

We'll keep him in our prayers... keep us posted on his progress!!

Here's my mom's email address. She knows alot and won't take your money!! gmomma@mac.com
I sure hope he keeps doing better:)

We are so happy that your puppy is going to be ok. We love you and think of you often.

Is he improving? I read this a few days ago, and am now wondering if things are resolving.... Hope so!!